I have now been in Arizona for 15 months, and soon will be heading back to Chicago to visit for the first time since I moved. You know the saying… “Home is where the heart is.”  I believe this to be true today more than ever. Although my mailing address is in Arizona, a HUGE part of my heart will always be with those I love back in Chicago. Luckily, I have made so many new friends in my new location which has given me even more reasons to love my life surrounded by the desert mountains.

Those who have not moved around may not completely understand the quote above. I have been given the opportunity to experience the “richness of loving and knowing people in more than one place”. How lucky am I? 🙂

The only drawback to moving across the country is not truly being able to identify where “home” really is. I love my life in Arizona, but at this particular time, my adult children, family, and many friends are back in Chicago. It is as if I live in the midst of two separate, yet deeply connected worlds. It has recently occurred to me that when I think of a place called home, it really does not exist.

So, I suppose home really is where the heart is. It exists wherever those I love exist. It is really not a physical place, but a feeling. In two weeks, I will go back home to Chicago to visit. Then, when the visit is over, I will return home to Arizona. Isn’t it a beautiful thing? 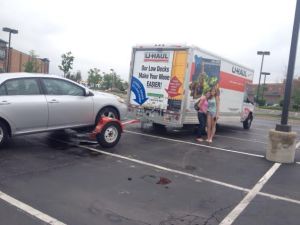 Last week, I piled everything I own on a truck, hooked my car up for the tow, and drove from Chicago to Arizona. To say this was challenging would be putting it mildly. However, the real challenge was leaving behind my kids, who I hope will eventually join me permanently. My 22 year old son is already out living on his own, but my 18 year old daughter will be staying behind her first year to attend her freshman year of college in IL. She is planning to move to AZ next year to attend school here. But for now, this is the hardest thing I have ever done. I did not realize how much I would miss her. I kept saying to her, “Meg, it’s okay. It will just be like you are leaving me to go to college a little early.” The truth is… I was the one leaving her.

I was in my 30’s, married with children, when my parents decided to pack up and move to Nevada. I was devastated, and thought they were being selfish. But as time went on, I understood that it was something they had desperately wanted to do, maybe even needed to do. They spent the last years of their lives enjoying life in the mountains.

So as Megan and I packed up all of our things, we had different boxes for her. Some were labeled “Arizona”, for when she comes to visit, and others were labeled “college”. We sat on the floor of her room packing those boxes, and I believe that is when the reality of it all set in. I always worried that I would have such a rough time when my baby left for college, but here I was doing the leaving first.

Saying goodbye was heartbreaking, for both of us. But it isn’t goodbye… just see ya later! As I drove away, with tears in my eyes, hauling everything I own in that 20 foot truck, I realized what I carried on that truck was just STUFF. What I really have is love… love for my children, love for the friends I left behind, and love of the life we have all built together. None of that goes away… life changes, relationships change… but they don’t end. Meg comes out to visit this weekend, and I cannot wait to see her! When she leaves to go back and prepare for her first year of college, it won’t be goodbye. We will just say, “See ya later”.