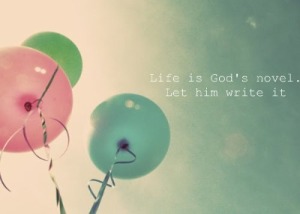 I have spent a lifetime trying to write my own story… to come up with exciting plots full of wonderful twists and turns… and then filling the pages with extraordinary characters.  Somehow, through everything, I thought that maybe I actually had some say in how the story progressed, and then ultimately, how it would all turn out.  The truth is though, that although I may have been the one physically holding the pen, I was not the one doing the writing and putting those words down on paper.

You see, whether you believe in God or not, I tend to believe that most of us would agree that there is some power out there that is greater than each of us, that guides us and determines the courses of our lives. For me, it is in attempting to control my own course and the courses of others where I find true discomfort.

When I let go, and let myself be guided by faith, goodness unfolds. Many times, I am tempted to pick up that pen and try to write the next scene the way that I would like for it to happen. But I find that the scene never tends to play out the way I had originally intended. Is it because I did a poor job writing? NO. Instead, I think it is because there is a different, maybe even better plan than anything I, myself, could have dreamed up.

My guess is that I have been saved from many potential disasters that might have eventually occurred if I had gotten the things I thought I wanted, or if things had gone the way I thought they should.

So, for today, I am trying to step aside and hand over the rights to my story to something or someone greater, and most likely MUCH smarter, than me!

“Life is God’s Novel. Let Him write it.”

Inspiration pours in from every conceivable direction.  Moments like this validate my decision to look westward as a final destination 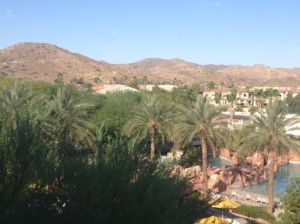 for living my life. Moments like this make me realize how truly small I am, and the realization sets in that there is no doubt of the presence of a power much greater than myself who created all of this beauty. No human hands could have ever created such magnificence, and for that I am humbled beyond words.

This morning, I sit on my balcony and look at out the majestic mountains, knowing deep within that I am exactly where I was intended to be. My daughter lies asleep in our resort room, exhausted from two days of house hunting & sightseeing. The 18 year old girl who very rarely ever picks up a book, choosing instead to watch hours of mindless tv at home, actually read an inspiring book cover to cover in two days from this very balcony. If that isn’t inspiration, I don’t know what is, and if you knew my daughter as do I, you would understand the significance of that!

Today, as I sit here drinking coffee on this balcony overlooking God’s creation at its finest, I feel inspired to begin anew. All of the dreams I have talked about, written about, and thought incessantly about are slowly becoming a reality. There were times at which I thought this was another one of my grand plans that I would most certainly never make a reality.  With still a few hurdles to overcome, I feel confident that another chapter of my life is being written at this very moment. I will not put the pen down, I will not allow myself to be distracted by those little doubts and fears that find their way in, and I will continue to put one foot in front of the other. I am finding that the only way to fulfill your dreams is to simply take one little step in the right direction, do the next right thing, and do everything in your power to not look back over your shoulder.  The moment is now!