It whispers so sweetly in your ear

Its tone comforts the edgiest soul

For its victim it holds no fear.

An injured heart is dangerously fragile

Its ragged edges shiver with every beat

Prone to destruction all the while

Unaware of all the dangers unseen.

Fear haunts the recesses of the mind

Brings with it twisted illusions

More terrifying than any you will find.

Now when the head is light and the eyes are clear

Fear possesses a quite different tone

From that tortured existence you find yourself free

Those demons, now dead and gone.

If I drove my car while looking back… I would surely crash. So why is it that I have lived my life looking back? Every decision I have made, seems to be rooted in the past. Failures or mistakes of the past have colored these decisions. Every new experience causes me to wonder if I will make the same mistakes, or will result in the same failures.

I may be a slow learner, but at least I am learning! I am coming to believe that if I focus on today, knowing that I am a different (maybe even better) person than I was in the past, it is not necessary to repeat the past. How many times have we failed to hear our friend’s laughter, the sound of the birds chirping, the smell of honeysuckle flowers which came into bloom recently? We were never able to lay claim to them because we were so lost in our own thoughts about yesterday or tomorrow.

Staying in today, staying in the NOW…. this is the only way to grow. Looking back and living in the past will keep you stuck, not allowing you to grow and change into the person you were meant to be.

This instant is the only time there is. ~ Gerald Jampolsky

Turn your head around… stop looking over your shoulder… stop judging yourself so harshly for mistakes you’ve made. Today is a new day. It may very well be the start of your new life. Go forward, and don’t look back! 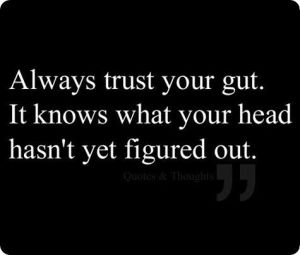 Sometimes it is easier to stay in the comfort of what you already know… to remain in a situation that is familiar. It is the easier, softer way. To some, change is exciting and refreshing, but to others (including me), it is frightening. Starting something new brings with it terrifying fear of the unknown and desperate uncertainty. But there are times when you just know that change will be good for you, even though you may be afraid of taking that first step.

The older I get, the more I realize how important it is to trust what my gut is telling me. There have been days when my gut was screaming out at me… and I have chosen to ignore it. You may be able to relate to that gnawing feeling deep inside telling you that something just isn’t right… or that something is not working. Listen to it, because that feeling is coming from a place that we can’t even comprehend.

Life is full of choices… choices to leave or stay… choices about people in your life… career decisions… you name it. We stress about these choices. Make lists of pros and cons. Ask all of our trusted friends. Lose sleep over these decisions. When all along, the answers are right there… deep inside our gut. Trust in that voice… let it guide you.

St. Roberts, Missouri was the first stop along my 27 hour journey from Illinois to Arizona.  I did not intend to stop, since I was determined to drive later into that first night. However, when I was driving along the winding, hilly road at around 11pm, I found myself driving in and out of a thick fog. I would get up to the top of a hill, become blinded by the fog, only to drop down into a clearing. This up and down, in and out, went on for several miles, until I finally decided it was time to play it safe and find a place to sleep for the night.

I woke early, refreshed, and ready to start back out on my journey. Driving long distances gives one plenty of time to think and reflect. I thought about that fog, and how I had felt such anxiety while in the midst of it, only to come out on the other end into a place of clarity. As the fog was in my rear view mirror, I had felt such a sense of relief and peace at having come out of it.

Such has been my life. How many times have I felt the anxiety of the unknown, the fear of what I cannot see in front of me? Eventually, after each fog in my life cleared, I would have that same sense of peace at having made it through. The fog never lasts forever. Yet each time I have found myself coming out of one, I feel that I have grown stronger for the experience, with lessons learned along the way. The knowledge that this too shall pass never seems to be enough when you are in the middle of a fog, vision impaired. However, once you come out of the other side, there is a sense of strength and accomplishment. So for now, I am happy to be in a place of clarity… at least until the next fog arrives. But then, this too shall pass!